Note: Updated story at the bottom of this post!

September: The year 2019 witnessed the release of Call of Duty: Mobile, the biggest launch in the history of mobile games. Well, the numbers say it all. In the first month of the initial release, CODM had over 148 million downloads on Android and iOS platforms, which generated a revenue of US$54 million.

According to the official revenue report by Activision Blizzard, Call of Duty Mobile had over 250 million downloads by June 2020, which generated a whopping US$320 million in revenue. And this will be increased by the end of Q3 of 2020, as PUBG Mobile lost its biggest market after the Government of India implemented a ban on the Chinese mobile game. And CODM’s Battle Royale is probably the best alternative for the former PUBG Mobile players.

Well, it looks, after the great success of Call of Duty Mobile, Activision is preparing to bring the mobile version of Modern Warfare’s Battle Royale spinoff. Yes, we are talking about COD Warzone that released back in March 2020. The free-to-play Battle Royale game has been a big success in 2020. According to the official statement by Activision, Warzone has hit a whopping 75 million players-peak in the second quarter.

Call of Duty: Warzone Mobile is in works!

According to a report by CharlieIntel.com, Call of Duty publisher – Activision has listed a new job on the official website. The job title mentions – ‘Executive Producer, Features’ for a “new mobile FPS in the Call of Duty franchise.”

The job listing also asks for the capabilities to “harvest, adapt and deliver the essential features from Warzone console and PC into their best mobile instantiation.”

Further, the job-listing mentions clearly in the post-responsibility section that the person has to “Serve as primary point of contact for Warzone Mobile leadership team for clarity and decisions on user-facing features, UX, and overall quality.”

Well, that pretty much confirms that Call of Duty Warzone Mobile is in the pipeline, and the game development will be starting soon.

Talking about the release date. Activision has not announced any detail about the Warzone mobile arrival. And apparently, it will be too early to predict the arrival. Considering the job listing, which appeared yesterday, it’s tough to expect the arrival this year.

If Activision follows the same development pattern for Warzone Mobile as done for CODM, then you can expect the Call of Duty Warzone release in early 2023. But again, this is just a prediction. No official date has been revealed by Activision as of now.

Why is Activision releasing another Battle Royale?

As some of you already know, Call of Duty Mobile packs two modes – Multiplayer and Battle Royale. The BR mode arrived with the initial release of CODM, and it was basically the mobile version of Black Ops 4’s Battle Royale mode.

So, what’s the problem with the current BR game?

Well, according to us, there’s a lot. While features like operators-skills, variety of weapons, BO4’s map sound interesting, the game lacks quality in basic features like vehicle mechanism, player movement physics, and a lot. Call of Duty Mobile community has been pointing out these issues since forever.

Personally, we think the developers should have improved vehicle physics in BR a long ago, but the issue still exists. Well, we really appreciate the development and content update that the developers have been bringing in CODM Multiplayer mode, but development of BR mode has not been up to the mark.

It’s evident, Activision has understood the situation and thus, is looking for a new development team to start creating the mobile version of Battle Royale mode from scratch.

Another Big Issue with CODM BR –

If you are supposed to be a Call of Duty Mobile player, you must have observed the content update pattern in seasonal updates. Activision has been bringing content like Maps, Operators, Game-mode from 2019’s Modern Warfare. In the recent Season 10 update, Mara and Mace, the popular operators from the Modern Warfare universe, made their way to Call of Duty Mobile.

Developers tried to do the same with the Battle Royale mode in CODM. It started with Season 9 update when the developers brought Warzone’s animation, armor-plate system and Gunsmith integration to CODM’s BR.

Well, the introduction of Gunsmith feature in both Multiplayer mode and Battle Royale is appreciable. But, according to us, the new armor plate system has messed up with the existing healing-armor system a bit.

In Warzone, the healing and armor system is way more straightforward. Players just need to focus on collecting Armor-plates and equip plates to increase the armor power. The HP regenerates on its own, similar to the HP regeneration in CODM’s MP mode.

The simpler HP and armor system lets the user care more about gun-fights and other features like Buy Station and contracts rather than maintaining the armor and health power. Earlier in CODM Battle Royale, the player needed to focus on grabbing an armor and collecting healing items – bandage, adrenaline syringe, and healing kit. The new armor-plate system, which, in fact, is not similar to Warzone’s, just adds another ‘equipable’ to care about.

In our opinion, the current armor-plate system has perplexed the existing healing system. And if Activision must introduce more features in CODM BR (say, Buy station) to maintain the parity with Warzone, it’s only going to add vagueness.

And that’s why we think Activision is working on the proper mobile version of Warzone. Warzone is currently available on PC, PS4, and Xbox platforms. And we just can’t wait for the mobile version of the popular Battle Royale of the year.

Stay tuned if you are interested in Warzone Mobile news updates. We will be posting more related details soon.

It is official now, the mobile version of Call of Duty Warzone is in the pipeline. According to a tweet by CharlieIntel, Activision is looking forward to expanding Warzone to Android and iOS platforms.

Well, no other announcement related to the game development and release date had been made by the President of Activision.

Stay tuned, we will be sharing more information on the same whenever possible.

Yet another news of Activision posting a job listing for the new recruitment for the development of a new “mobile fps game” has been on the internet for a while. Earlier, Activision was reportedly recruiting for the position of Executive producer for Warzone Mobile, whereas, the new listing is asking for the recruitment of the ‘Lead UX designer’ for a “new mobile fps” game.

You can check out the screenshot for the same below.

But, it looks like Activision has finally confirmed that Warzone Mobile is in development. And the studios are hiring for the development of the same.

Well, again, there is no official release date, but Activision may launch Warzone mobile along with the new version of Warzone for PC, PS and Xbox, called Warzone 2, supposedly. 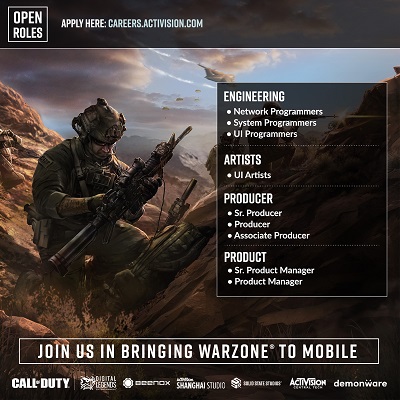 Activision has confirmed the release of the mobile version of the popular first-person Battle Royale game – Warzone. But, details like the release date of Warzone mobile and other details are yet to be announced.

Vivek has been a fan of the COD franchise since forever. Perfection is his forte and the same can be seen in his work. He loves to invest his time in creating awesome content on YouTube and discovering the latest games.

How To Unlock Spider Man Homecoming In Lego Marvel Avengers